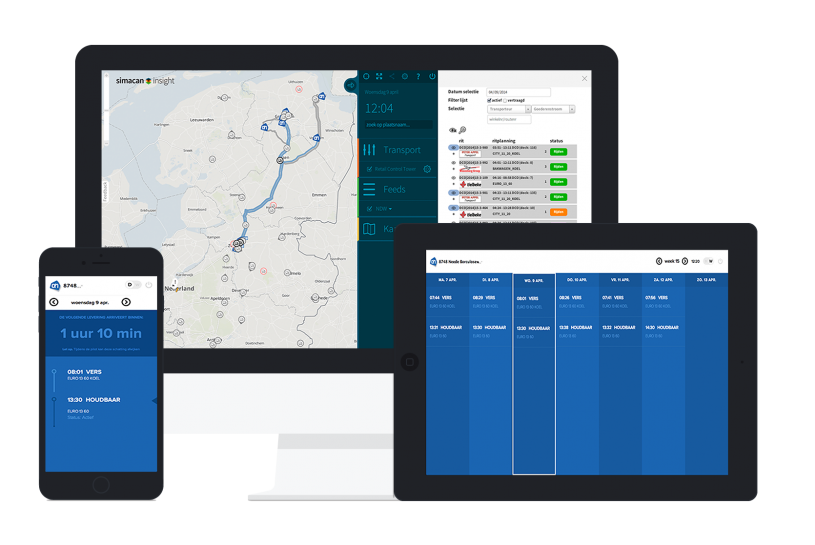 Simacan Control Tower integrates geodata in the linked data standard INSPIRE and Linear referencing (ISO 19148) with transport data to create insight in the daily logistic operation for shippers.
Logistic planners see real-time data from the trucks on a map, together with traffic information from multiple sources. These include commercial data from TomTom, and public data such as NDW traffic and incident information, matrix signs, and in the near future RDW transport restrictions.

An example of a logistic enterprise that uses Simacan Control Tower is Ahold. Their transporters actively share their data with Ahold. This results in a real-time overview of the trucks delivering to the supermarkets in the Netherlands and Belgium. Several other large shippers and delivery companies have started using or have shown interest in the application.
The use of Simacan Connect Technology is not limited to the transport sector. Operators in traffic control centers view the same traffic information as the logistic planners. The technology also underlies the matching of similar traffic messages from multiple sources in Simacan Traffic Cast, which is the basis of the traffic messages broadcasted by ANWB (the Royal Dutch Touring Club).

The underlying Simacan Connect Technology is the fundament on which the above service are built. It has a key role in combining public (open) datasets with commercial datasets by making all data map vendor independent. This way, data from various sources can be easily integrated and presented in an appropriate way, posing no restrictions to the map of the end user.

Simacan Connect Technology is currently being developed further to include a canonical data model. It will use RDF to describe the reference ontology between all different data elements making it easier to begin developing machine learning applications using the data.

Take a look at the visualisation of the open data sources on a map: http://demo.simacan.com/signup/signup (create a free demo account)